Back to all posts

SONGS OF INNOCENCE AND OF EXPERIENCE 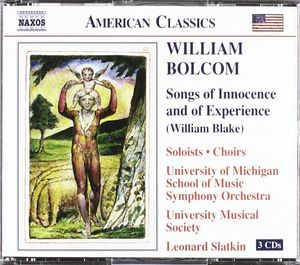 "Bolcom's dream of setting Blake's poems to music began when he fell under their spell as a teenager; he worked on the composition of Songs of Innocence and of Experience on and off for 25 years, completing it in 1982. Blake's own principle of "contraries" and his use of many poetic traditions is a perfect counterfoil for Bolcom's eclecticism, which encompasses styles ranging from solemn chorales, lush romanticism, abrasive, dissonant modernism, to jazz, folk, country, and rock. His interpretation of the poems, which he calls "A Musical Illumination," is sometimes startling, but always interesting, highly personal, and unquestionably sincere....For some of the most arresting, convincing settings, Bolcom uses his well-known and beloved cabaret style, sung to perfection by his wife and partner, mezzo-soprano Joan Morris." — amazon.com

Songs of Innocence and of Experience